Spooky Cocktails: Putting the Bitch Back in Obituary

It's been awhile since we tippled on a Tuesday. I thought it was time to bring the cocktail portion of Shivers of Delight back. I present to you a cocktail known as The Obituary. It's known by that name because it's said to be able to wake the dead, but after having just one of these I thought I saw dead people. The Obituary is a New Orleans cocktail and was created at Lafitte's Blacksmith Shop (actually a bar). My husband took a sip of my drink and declared "that puts the bitch back into obituary."

Mix ingredients with ice and stir till blended.
Strain into a chilled martini glass. 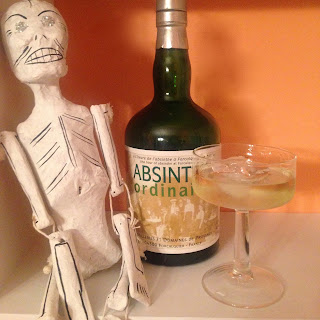 Don't make the mistake I almost did by not paying attention and pour 2 oz. of absinthe into my glass before realizing that it didn't smell like gin. That could have been deadly. One of these cocktails was enough to last me through the evening and I'm not sure I can blame it on the green fairy, but I lay awake with a fever and chills all night. It was as if the green fairy was trying to pull my soul from my body. Don't let that stop you though. I survived and it was delicious.

Meagan Segal grew up in a household where her parents were a doctor and a nurse. Not unexpectedly, Segal's interest in the human body ("I think of bodies as fragile equilibriums where so many things can go wrong") became a focus for her. Yet, as she puts it, "I cannot abandon my other love of all things pretty."

Segal expresses her fascination through art. Her website gallery displays watercolor and oil paintings that are absolutely beautiful. Segal has a delicate touch and her alluring illustrations and decorative items will make you love your body all the more. We can purchase Segal's art in her shop Mome Rath Garden.

When I was in college I took a class in linocutting. I still have my tools around here somewhere. Carving into the linoleum block was very relaxing for me, but I quickly learned it takes a great deal of focus and a very steady hand to be any good. My finished products could be described as beginner-average, so I really admire people who do it well.

Jack Ankersen has a very steady hand. We know this because when he is not creating linocuts he is a tattoo artist. No one wants a shaky-handed tattoo artist. Ankersen's linocut prints are beautifully detailed and spooky. Just the way we like it. You can find these prints at more at his Etsy shop.

Andersen says that the Krampus Church Burner print was one of the first linocuts he ever did. Wow, that is much better than beginner-average. All I can say is it's a good thing I'm not a tattoo artist.

To see some of Andersen's tattoo work check out this article in TattooDo.

A Drink With Death

Nothing makes you feel more alive than that first cup of coffee in the morning. I know because I'm having mine right now. To perfect it you really need the right mug. That's why I'm drawn to the mugs from Nicole Pangas Ceramics. Because even though I want to feel alive, I don't want to loose my charming, the-world-is-going-to-hell personality.


Pangas is from Chelsea, MI. I wonder if she is going to be at the Bewitching Peddlers of Halloween Art Show in Chelsea next September.

I really like these and they would go swell with my black dish collection. I think I need a teacup, too, for drinking whiskey.  When is payday again?

I'm fascinated by poisons- especially the ones that are produced naturally in plants. I think we probably have no idea of the vast numbers of people who have been killed by poisons. When I think back in history to the women who toiled for their families and had access to and knowledge of all those poisonous plants, well, I can't help but think more than a few abusive  husbands wasted away unexplainably. (If you're reading this, dear husband, you have nothing to worry about.) It's a fascinating topic and I really need to start a collection around it.

My husband may not have anything to fear, but I have a few other people in mind who could use a  poisonous cocktail. Not you, of course! No, not you.

Quilts for Those on the Odd Spectrum

Handmade quilts are a luxury. If you sew one yourself, you understand the significant amount of time put into creating it even if you're using a traditional design. When you begin to create your own designs the time increases and quite frankly I don't know how a quilter could ever part with a quilt they made after all that. It must seem like a child to them. I've always admired them.

Then I saw the quilts designed by Patti Pinkus. She creates quilts for those on the odd spectrum, like us. These are not traditional designs, though Pinkus does those too. Her quilts feature bugs, aliens, and skeletons based on some ancient designs.  I'm looking for wall space as I type. Her shop is Sunbury.

You want to take up quilting now, don't you? Don't worry. I understand. 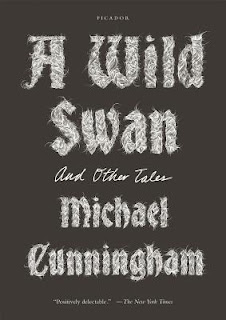 I finished reading Michael Cunningham's A Wild Swan and Other Tales (November 2015) last week. The paperback edition came out in October 2016 and I just picked it up.

These are the kinds of stories that make you wince, take a swig of whiskey, and then give a disheartened chuckle under your breath as you feel your chest tighten.

Cunningham is a Pulitzer Prize winner and doesn't generally write horror, science fiction or fantasy (though many of his previous novels have contained a hint of them), but in this small book of short stories he rewrites well-known fairytales from a modern perspective. He seems a bit angry about them. In the first chapter "Dis. Enchant." Cunningham starts off with:


"Most of us are safe. If you're not a delirious dream the gods are having, if your beauty doesn't trouble the constellations, nobody's going to cast a spell on you...Vengeful entities seek only to devastate the rarest, the ones who have somehow been granted not only bower and trumpet but comeliness that startles the birds in the trees, coupled with grace, generosity, and charm so effortless as to seem like ordinary human qualities. Who wouldn't want to funk them up?"

Who indeed? In "A Wild Swan" Cunningham tells the story of the twelfth brother who despite the best intentions of his sister is only partially turned back into a man. His right arm remains a swan wing. He tries to make the best of it, but ends up middle-aged, alone, and a regular at the bar scene. "The twelfth brother can be found, most nights, in one of the bars on the city's outer edges, the ones that cater to people who were only partly cured of their curses, or not cured at all."

"The Crazy Old Lady" describes a woman who thought she was winning the race, but somehow got left behind. "Your solution to your slackening body was squeezing it into ever-tighter dresses until, by the time sixty loomed, it seemed as if the dresses themselves held you upright on the bar stools; that if they were cut away, you'd spill onto the floor and lie there, helpless, a pink-white muddle of overused flesh." And that, my friends, is how the witch came to build a gingerbread cottage made out of candy.

I want to quote every line. Cunningham has an addictive way with words and I kept re-reading lines just because they seemed so perfect. I needed more. Other fairytales that Cunningham slams into reality are Jack and the Beanstalk, Sleeping Beauty, The Monkey's Paw, Rumpelstiltskin, Beauty and the Beast, and Rapunzel. Let me tell you that no one comes out unscathed.

If you're feeling the slightest depressed, do not pick up this book. However, if you feel you're pretty grounded at the moment then by all means read this book. I loved the fresh perspective on these stories. It made me realize that no one is really that special and blessed. In the end, we're all just fucked so you might as well make the best of it.

P.S. The illustrations by Yuko Shimizu are beautiful.

I love when I see an artistic partnership that just works. It fulfills some kind of fantasy of a perfect, happy world for me. I'm sure there must be arguments about dirty clothes on the floor like every other household (right?) but I like to imagine them in a sunny studio creating amazing things and singing. There may also be animals that talk, but this is my fantasy so let it alone.

That's the life I imagine for Cody Vrosh and Sheatiel Sarao of Binary Winter. They are enamored with all things from "steampunk to satellites, robotic birds and fairytale astronauts, calculating octopuses and squirrels of the apocalypse." They use their talents to create books, t-shirts, ties and such. They have a shop on Etsy that you'll want to add to your favorites.


All of Binary Winter's images bring a smile to my face. They can be a bit whimspookal.  We all need a reason to smile today so, check out their shop- it's like the apocalypse with hug.

I like the concept of FloridXFauna's collection of jewelry that combines crystals and bones. The artist creating these interesting pieces is Kristen Phillips. Sculpted crystal formations morph into anatomy and are then cast in an eco-resin which Phillips describes as more environmentally friendly than the usual petroleum-based resins. The finished results are raw and earthy and lovely to look at.

Dirge Magazine did an article about Kristen Phillips in February of last year. You can read it here. And, by the way, it looks like we all should be reading Dirge Magazine.

Not sure if you know about VIDA. It's an online store that invites textile designers from around the world to create textiles for items such as pillows, t-shirts, tops, pocket squares, and scarves. It's a bit more high-end than say, Society6, but not outrageously so. Of course, when I found it I had to put in my favorite search word "skull".  Here's a taste of what I found.

If you like these designs there are well over a hundred more to choose from. I really liked what I found here. The tops and scarves are nice enough I think for a casual day at the office.  Check out this shop and support an artist or two.