Last weekend my husband and I went to see a local theater production of Evil Dead: The Musical.  Let me say that my husband is not a fan of the horror genre in the least and I am squeamish about seeing anything violent so we have never seen any Evil Dead movies, but we are familiar with them enough to know that we won't be watching them. Let me also say that my husband is not a fan of musicals either. He didn't believe me when I told him we were going to see the movie Sweeney Todd and that it was a musical until 5 minutes into the movie when he looked at me in utter horror- too late.

Neither of those things stopped me from dragging my dear husband to the production of Evil Dead: The Musical. I told him it was the season of torture. 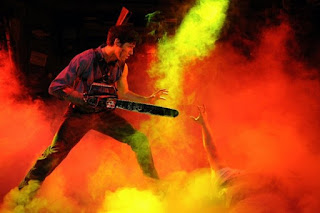 I can tell you that several times during the performance I looked over at him and saw him laughing-hard.  It is worth your time, my friends, to seek out a production near you.

Have you heard of this musical? It was written by a group of friends in Toronto and performed for the first time in a bar in 2003. The Off-Broadway production took place in 2006. It captures all of the humor and gore (there is a blood splatter zone in the front section of the theater) of the movies and sets it to some pretty funny songs. My husband keeps singing the refrain of What the Fuck Was That? to me.  Other titles include: Bit Part Demon, Look Who's Evil Now, Death is a Bitch, and Ode to an Accidental Stabbing. If you're curious, you can purchase the soundtrack from Amazon. 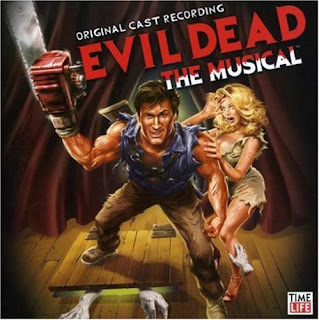 The plot of the musical involves five college students at a cabin in the woods for spring break. An evil force is accidentally released and all hell breaks loose. Need I say more? This musical mocks every bad decision you've ever seen in a horror film and it's funny. 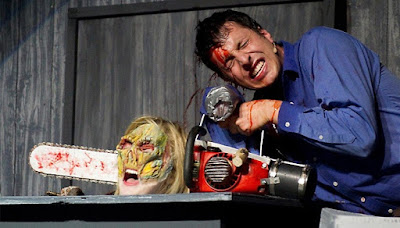 I think the producers of the show would like to see this musical become as popular at The Rocky Horror Picture Show and I think that might be possible. In the next few months there are productions taking place around the country. See a list of cities with links to tickets here. There is also an on-going production in Las Vegas- probably the best place to see it.

Watching episodes of the tv show The Addams Family brings back memories that make me feel all cozy inside. I loved that crazy family as a kid and even more so now. No matter what outlandish thing happened, Morticia was calm, cool, and collected. She is a great role model.

On September 29, 1988, Charles Addams the macabre cartoonist who created The Addams Family died. Today we honor him and his work. One of Addams first jobs after art school was for the magazine True Detective where he was charged with retouching crime scene photos to remove the blood from bodies.  Addams has been quoted saying "A lot of those corpses were more interesting the way they were." That was in 1933.

Addams went on to draw many cartoons for The New Yorker and it's where he first came up with the Addams Family series in the 1930s.  It's hard to believe they've been around for so long! It wasn't until the 1960s that The Addams Family television series would come into being and although it only ran for two seasons, it has remained a part of our pop culture history.

Addams published many books of his illustrations and illustrated other authors' books, too. I'm thinking that collecting first editions might be fun. While I was doing some quick research on Addams, I came across a series of decorative plates that were produced around The Addams Family. The were offered in the early 1970s by Schmid Bros. Inc. and seem to have been made for a variety of holidays. (Plate collections were really popular in the 1970s. I seem to remember that The Parade Magazine that came in the Sunday newspaper always had an ad for some collectible plates.)

Ebay has several of the plates available right now. Another collection?? 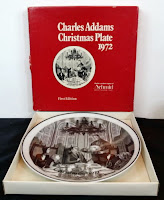 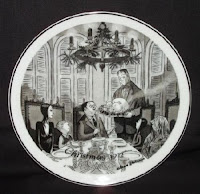 Charles Addams grew up in New Jersey, so don't let anyone tell you nothing good ever came out of New Jersey.

And while you're thinking about Addams stop over to the Tee & Charles Addams Foundation website. They even have a gift shop.

I surprised I haven't come across the work of Abigail Larson much sooner. Not only does she illustrate books and designs dark, lush prints, she has designed a beer bottle label for Triple Crossing Brewing and a wine bottle label for the Vincent Price Signature Wine Collection. Larson even had an interview with Fluevog- my favorite shoe company!  Were have I been?

Her latest endeavor is illustrating H. P. Lovecraft's "The Cats of Ulthar." You can pre-order it now from Amazon with a release date of November 15th.   Done.


And, it keeps coming: Larson has also collaborated with Dellamorte & Co (love them, of course, too) to create several E. A. Poe figures.

You and I can purchase her macabre prints at Society6. Which also means t-shirts, mugs, and heck, maybe a shower curtain! Yep, there are several shower curtains.

Oh, I can tell this is going to get very expensive. I have a lot of catching-up to do. Please take some time to explore Abigail Larson. I don't think you'll be disappointed, but you might be a bit more broke.

Felted Wool for a Fairy Party

It's time to be thinking about hats- warm hats. I was particularly thinking of witch hats. I like a felted wool hat rather than the one-time-wear polyester ones you buy at the costume shop. If you're going to get a witch hat, make it a good one.

I recently discovered the fantasy inspired hats from Moss Fete. Wendy, the milliner, started making felted hats in college and eventually opened a shop of vintage inspired hats called Miss Fitt. After a time, she felt inspired to create hats for "her fellow woodland creatures, nymphs, and creatures of the night." Her answer to that was to create the Etsy shop Moss Fete.

I love the playfulness of these hats and accessories. They could be part of a costume or something you wear all winter long. The dragon wings are spectacular.

You can tell I'm enthralled by these pieces because I couldn't stop posting pictures. There are over 100 hats to choose from and a variety of scarves, mittens, and wings. These are pieces to treasure and start a collection around.

I think I'm still a teenager at heart because I can't be turned away from a pink monster. Spooky with sugar sprinkled on top is a weakness. Actually, anything with sugar sprinkled on top is ok by me. I'm starting off Monday in my happy place with items from lOll3 Shop by the artist we'll only know as Lorenzo. She describes her work as "art oddities." I describe them as delicious.

You see how you can get my attention? Just place the items on pink. They don't even have to be pink! Jeez, I'm easy.

What do you get when you combine Victorian style with Burlesque? Answer: some adorable corsets from Emerald Angel Designs. Designer Maria Flynn creates and sews a trousseau worth of sexy, wicked clothing. Wicked in the best sense, of course. If you're a lady, you know there is nothing like a corset to make you feel glamorous.


This is only a tiny bit of what is offered in this fantastic shop. You could also shop for skirts, dresses, hats, purses and even baby and cat clothing. Really! I'll leave you with this.

For the Lover of Spooky Books

If you love to read spooky books, I think you'll enjoy the offerings from LiteratiClub. The shop puts text from books onto scarves, umbrellas, and totes.  Currently the titles they offer are Dracula, Frankenstein, Dorian Gray, and The Raven. Any of their items would fit perfectly into my Halloween wardrobe. 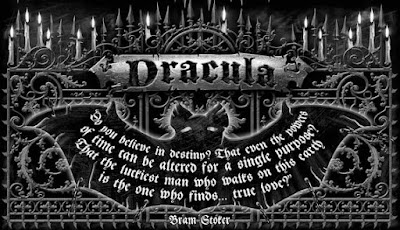 The scarves would look great draped across the top of a window or thrown on the back of a chair. That Raven umbrella is to die for, don't you think?