I love changing out accessories in our home. They can transform an entire room in a blink of the eye. It's kind of magical- at least my husband thinks so when it takes him two weeks to notice the change.

If you'd like to bring a little magic into your house, I advise you to check out Cutting Edge Design Co. This shop has accessories that "bring magic, positivity and a little sass" to your home. I love the wall banners, divination tools, and canvas pouches; the t-shirts made me giggle.


Actually, just about everything in this shop makes me giggle. A little humor in the darkest gothic room is just what we need.

Illustrator and artist Bailey Berendsen is delightfully strange. Her day job as a theatrical technician exposes her to all types of oddities which she then channels into some whimspookal art that she sells on Etsy and Society6 as BaileyBPortraits. I like her playful creepiness.

Berendsen has also written two children's books and does custom portraits of pets. Visit her website and shops for additional works. 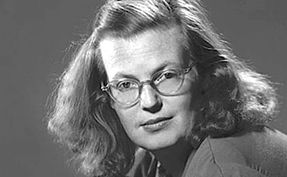 I'm a little late on this one. I forgot to let you know about one of my favorite summer reading lists. Every May, the Shirley Jackson Awards are announced for the previous year's "outstanding achievement in the literature of psychological suspense, horror, and the dark fantastic."

I'm ashamed to say that I haven't read any of the winners - yet. I'll be heading to my library with the list and then settling into my deck chair with a big black hat for shade and a gin and tonic by my side before submerging myself into a few of the winners. The 2016 Award Winners look intriguing. Come on in! The water's fine.

One book I have read recently (not one of the awards) that I very much enjoyed was The Secret Place (2014) by Tana French. This is one in a series of books about a Dublin murder squad. It's the only one I've read in the series and each book stands alone, so you don't have to read them in order. There is a little bit of magic and a lot of suspense about who murdered a boy found on the grounds of a private girls school. It was the kind of book that even when I wasn't reading it I was working out in my head who I thought the murderer was. There were many late nights with this one.

But I digress. If you want to read more posts about Shirley Jackson just type in her name in search box on the right. She comes up regularly in this blog.
Posted by Jori at 6:35 AM No comments:

While I have never been a collector of the Halloween village buildings that manufacturers like Dept. 56 make, I've always admired them. I think people who know me are a little surprised that I don't have a huge village spread around my house. My difficulty is space, you see. I just don't have enough of it. There is also the cat factor (we have six). They would be like Godzilla in a sushi shop with a village spread out on any horizontal space. (All horizontal spaces are beds to cats.)

That doesn't prevent you from having a spooktacular Halloween village, so I'd like to present to you Crypt 31. Joseph Porter is the artist behind the fantastic handcrafted, haunted buildings that are illuminated by micro LED lights. Each piece is made to order and no two are alike. The shop is less than a year old and plans to expand into accessories and figures. Currently Series 1 is available for purchase.  If you want to have a ghostly house by Halloween get your order in before August. That gives you just about a month to decide which building is your favorite.

There are a few more buildings in the series to view at Crypt 31.  These are really fun and I'm weighing the idea of shoving cats off shelves as I type.

T-shirts for Those Who Prefer Longer Nights

Even those of us who choose to live in the dark can't escape summer with its sunny, hot days. Eventually you have to trade the dark woolen cloak or black lace gown for a t-shirt. I don't know if you've noticed, but black clothing really holds the heat.

Limeyts can help you stay cool and still let people you know you prefer longer nights than days.


You can confidently wear any of these t-shirts to the family reunion picnic and not be the center of gossip among your cousins.  Well, at least your t-shirt won't be the focus of the gossip. You are still you.

Everybody needs a hand once in awhile. Sorry, I couldn't resist. Let me introduce you to Gabe Escamilla. He creates some handy hooks that will hold everything from a guitar to a towel. I think necklaces would look fabulous handing off of one of these. Escamilla's shop is called DeathGrips. You need one.

I think I would put one in a dark coat closet so when your guest reaches for his coat you might get a yelp.  Good times.

Today I have some embroidery projects for you that can be completed as a summer project and will allow you to feel good about accomplishing something in the heat. Embroidery doesn't take a lot of energy and as long as the pattern isn't too complicated you can enjoy an adult beverage of your choice while doing it.

Alina Fera has created some embroidery patterns for those inclined to spookiness. Her shop is ALIFERA and the patterns are downloadable so you can start today.

These patterns look simple enough for even an embroidery beginner to complete. The thing I like about these is that you don't have to stop once the pattern is finished. You can keep adding details and stitching till summer is gone.

I stumbled upon weathervane artist David Smith through a painting he did of an approaching storm. I wanted to see what else he was painting and was blown away (pun intended) by his weathervanes. What makes Smith even more interesting is that he never studied art and learned he had a talent for metal art quite by accident. You should read his bio because it's that fascinating- at least it was to me.

Smith sold his first weathervane unexpectedly on Ebay as a way to prove that his art wouldn't sell and he hasn't stopped selling art since. He now sells on Etsy and his shop is DavidCopperSmith.

I think Smith's work is stunning. If you'd like to see a weathervane of sorts that he did of our current president, you should hop over to his website. It will give you a chuckle. And, if you're interested in Smith's painting of an approaching storm I'll post it below, but you can see more of his paintings on Etsy.

I had to look it up, so in fairness, you might not know what a vèvè is either. Dictionary.com didn't have it, but good old Britannica.com explained "in Haitian Voodou, geometric drawings that represent the Iwa (spirits)."

Now that we have that out of the way, I'd like to present BlackWaterSiren. This shop is creating the most beautiful Voodou vèvès into pendants and rings. Using sterling silver, copper, bronze, and 14k gold, these pieces are elegant and mysterious. I'm sure they would be great conversation starters.

Click on the links to read more about each of the spirits. There are many more available in the shop so browse around and find the perfect Iwa for yourself. It's important to surround yourself with a little magic.

Tiny medals are also available for each of the spirits. A charm bracelet would be amazing.
Posted by Jori at 6:36 AM No comments: