Halloween Treats and a Ghost Story

It's HERE! I write this on Halloween morning; the sun hasn't come up yet and I'm looking forward to the day. But first, I have to tell you about some Halloween chocolates from Vegan Treats Bakery. They're located in Bethlehem, PA and once a year they offer the most delightful box of Halloween treats you could ever imagine. You have to order as soon as they post about them because they sell out.

These chocolates are not inexpensive, but they're worth every penny. I ordered them for my and my husband's 13th wedding anniversary (yesterday). They arrived a week or so ahead of the date and my husband wouldn't let me have a singe bite till yesterday! The wait only heightened the experience. Every piece was oh, so, heavenly. 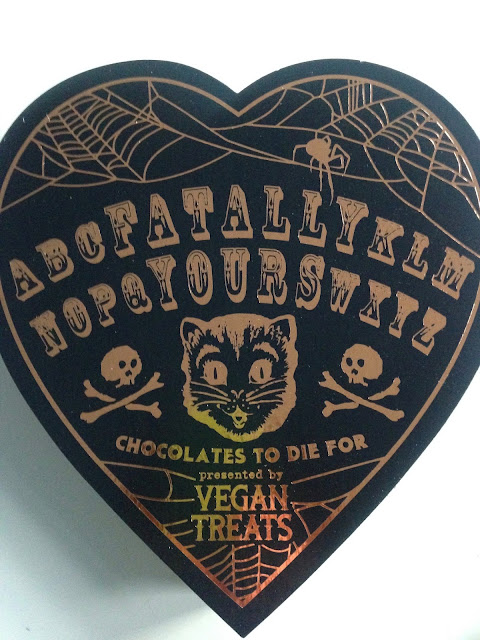 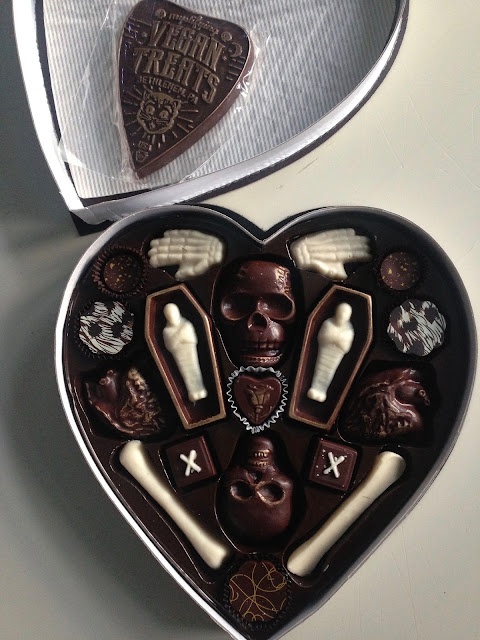 I plan to finish these chocolates up today with a glass of red wine while I wait for trick-or-treaters. If you stop by, I just might share one with you.

Now for the second thing I want to tell you- my own little ghost story. All of this is true as I remember it happening 23 years ago.

I was living in Athens, GA in a large Victorian house that had been turned into two apartments in the historic Cobbham District. I lived with several housemates on the second floor of the house and we were always out late at night listening to bands and wandering into little bars. It was a magical time. My room was in the front corner of the house next to the door to the apartment which was reached through a long enclosed stairwell.

When I moved into the apartment, my housemates let me know that the house was haunted. It was a bit of a joke between us. The story I was told was that at one point when the house was used by a family, someone had hung themselves in the stairwell. The weird thing was that we often heard, very clearly, the footsteps of someone coming up the stairs. We would jump up to answer the door, and no one would be there. We would laugh and look at each other nervously.

One night, everyone was out and I had opted to stay in for the night. I was by myself in the house and headed to bed around 10 or 11. We always had several cats in the house and it wasn't unusual for a few of them to sleep with me and because the house was old, my bedroom door didn't stay shut and it was easy for the cats to push it open and jump on the bed.

I had just settled into bed and was starting to drift off when I heard my door slowly creak open. I waited for the accompanying shake of the bed as a cat jumped up and after 30 seconds or so I didn't feel anything so I opened my eyes to see what they were doing. I wish it had been a cat that opened my door. As my eyes peered out in the darkness I could see that my door was open and light from the hall was spilling into the room. The next thing I noticed was a tall, dark shape, the size of a man, gliding toward my bed. I couldn't make out any details other than a head, shoulders, arms reaching out to me and then just deep blackness falling down- like it might have been wearing a robe or gown. I bolted upright in the bed! I shouted "who's there!" I was all I could eek out. My heart was beating fast and I could feel the hair on my arms standing up. The figure stopped for a brief second- almost in surprise-  and quickly backed out of my room. Then the door swung shut.  By itself.

To tell you the truth, I don't remember exactly what I did after that. I know I didn't go back to bed until my housemates came home. Once the figure left my room, my fear, surprising, seem to leave me. I never had trouble going to sleep in the room after that and I never saw the figure again. I can't explain it, but I know that to this day when I tell the story the hair on my arms still rises and I feel a chill down my back.

Email ThisBlogThis!Share to TwitterShare to FacebookShare to Pinterest
Labels: Welcome to Purgajori

It's October 30th. Most people just call it the night before Halloween, but in some regions of the US and in some areas of the world it's known as Mischief Night, Cabbage Night, or Devil's Night among other names. The festivities get divided into two nights- one for tricks and one for treats.

I've never seen any signs of mischief in the areas I've lived, but the 30th is supposedly the night to cover a tree or house with toilet paper, egging cars, and smashing pumpkins. It's a bit mean-spirited for me, but I like traditions, so I'm offering you the devil.  It's kind of interesting, though, if you think about it, that my husband and I got married on Mischief Night.


I can't believe I haven't started an antique collection of devils in honor of our marriage. It makes sense to me that since this is our 14th year of marriage (edit: My husband just reminded me we've only been married 13 years- it seems so much longer than that!) I should have at least 14 13 pieces by now. I'd better get shopping.

Rebecca Miller Campbell is a self-taught artist from a family of self-taught, folk artists living in the foothills of Appalachia. I'm so excited to show you the beautiful dolls she is creating. From her bio, you can tell she pours as much love into them as she has for her heritage and family. Her shop is called MillerCampbell.


The Crone really calls to me. Have I ever told you how much I love possums?

Every Halloween needs a black cat or three. How about thirteen in the form of a pin for your orange sweater?
Ok, I lied. I only have eleven brooches to show you, but I also have these two lovely black cats for your viewing pleasure:

Our living room is the hardest space to photograph because there is very little light, but I like it that way. My husband and I have a battle of 60 watt vs. 40 watt bulbs- I'll even use 20 watts if I can find them. We constantly follow each other around replacing bulbs. At work, my office is equally dark and I have been called "The Mole." I am consistent.

As of today, this is how the living room is shaping up. 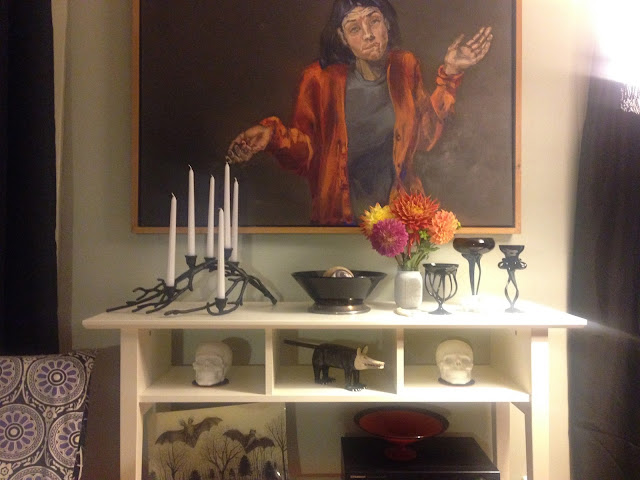 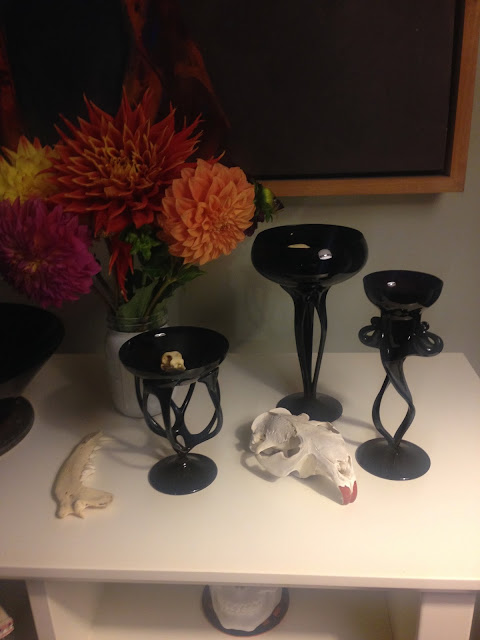 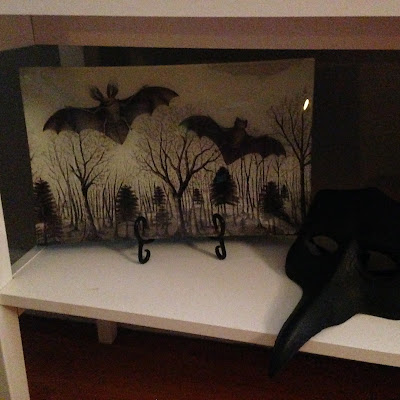 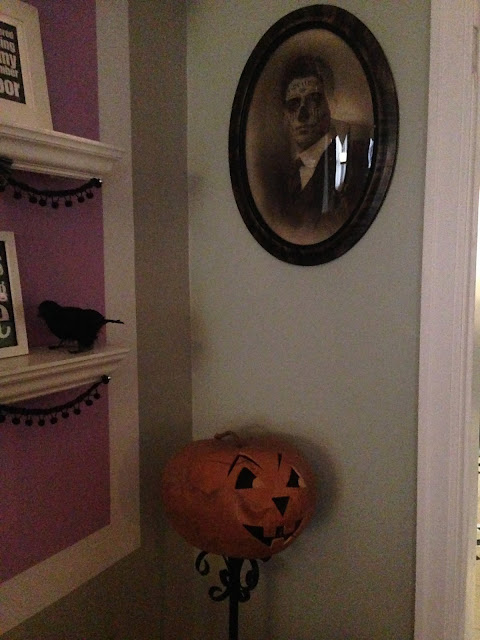 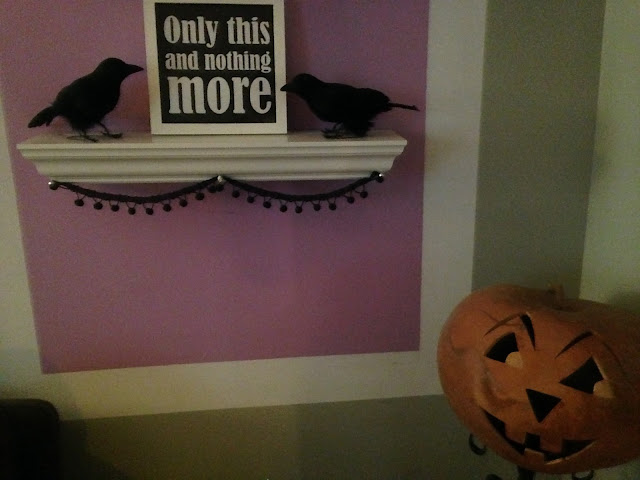 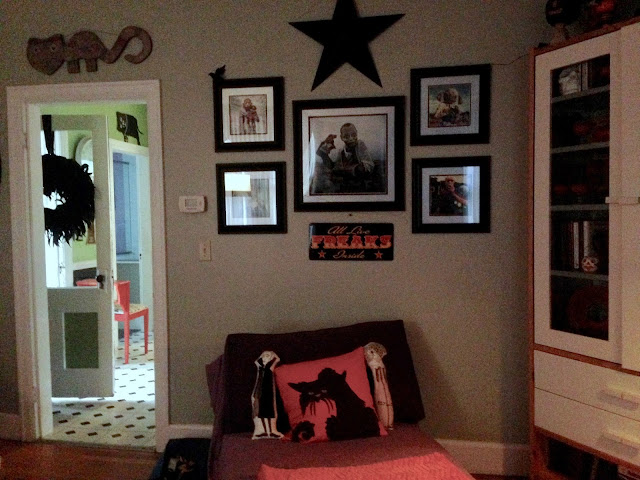 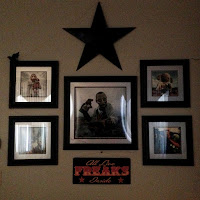 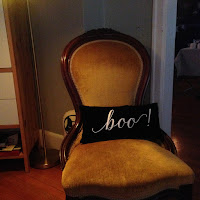 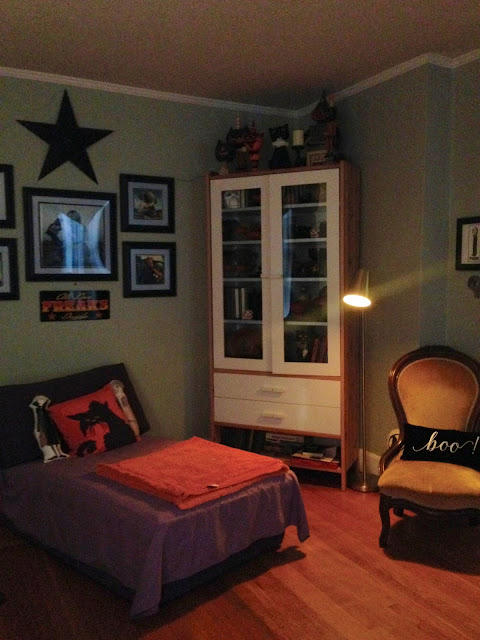 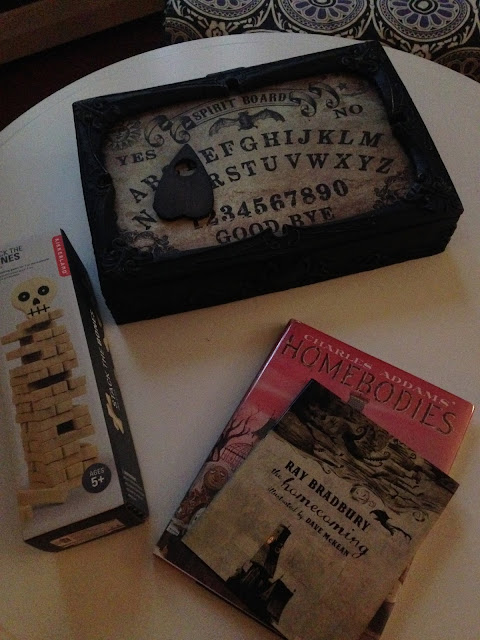 If you'd like a look at "The Raven" poem on the wall, you can check it out in a post I did a few years back -here. You can also take a look at my glass collection in the cabinet: right here.

Shall we wander into the dining room? Our house tends towards the spooky side on any given day. It doesn't take me long to decorate for Halloween anymore. A few extra skeletons are invited in, I hang some knives from the ceiling, I boost the candles- you get the idea. 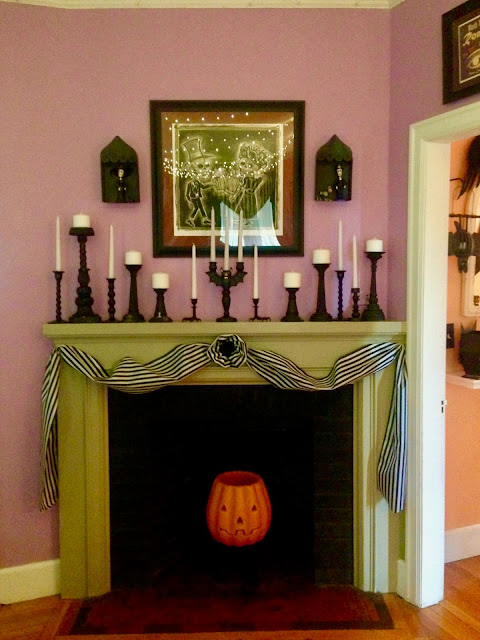 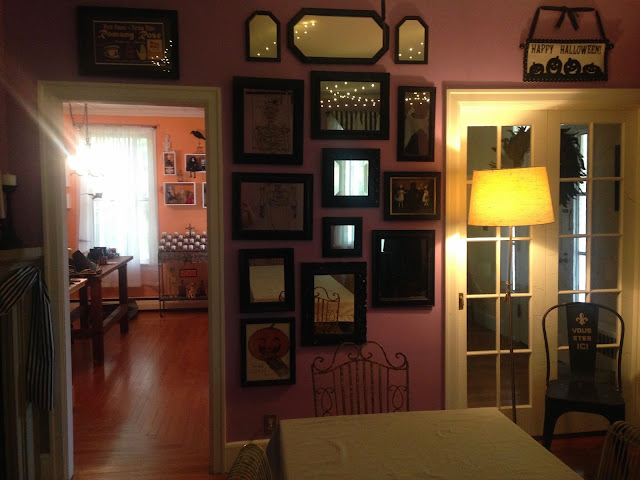 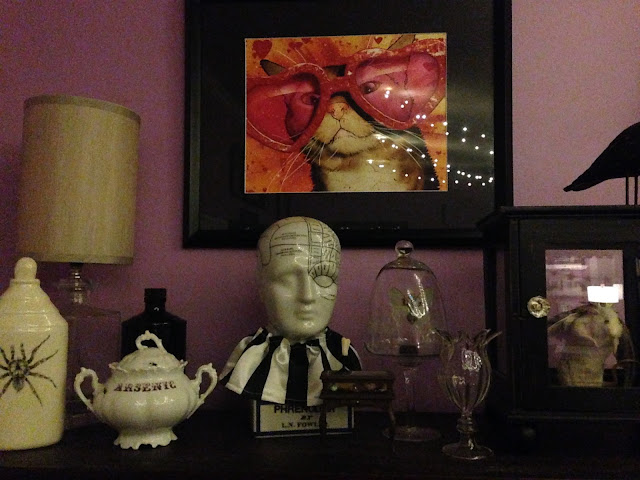 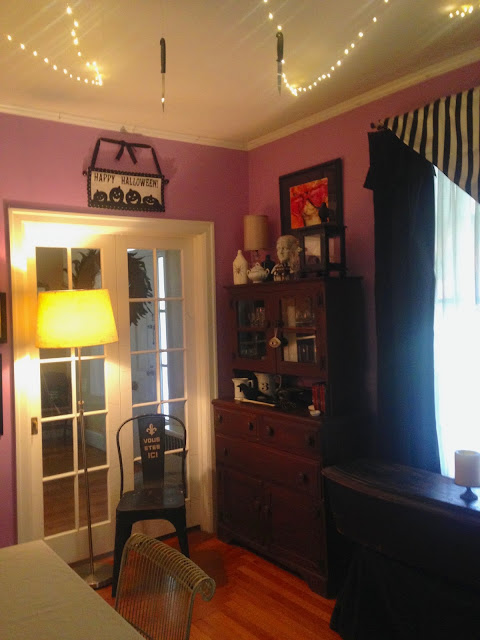 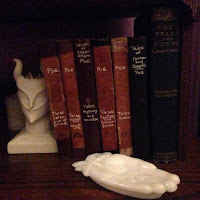 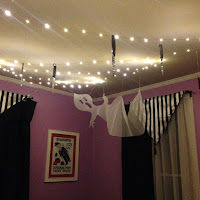 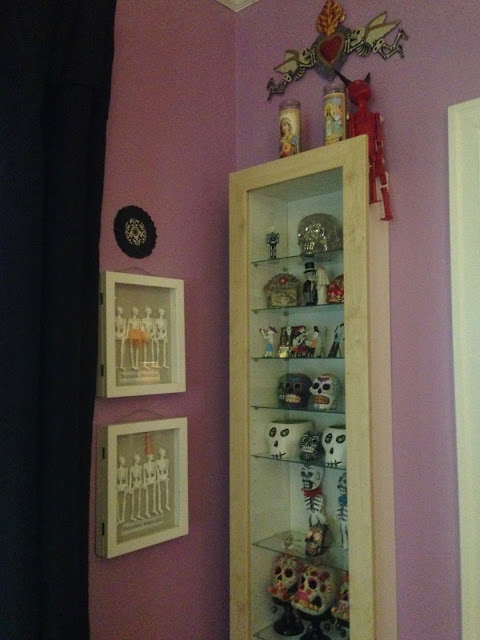 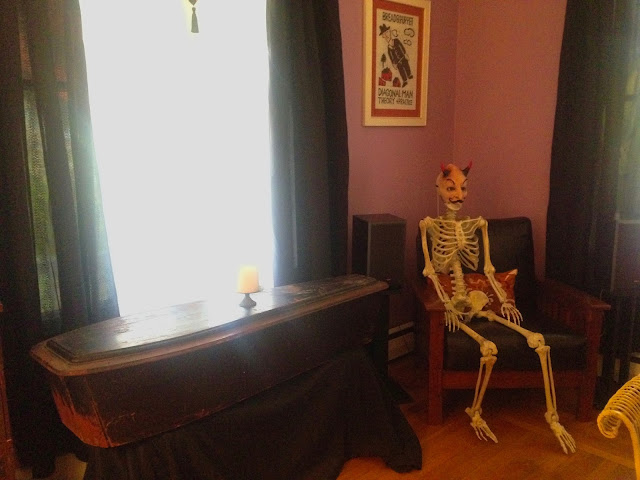 Do you put masks on your skulls? I think it makes it a little bit creepier.