Tipple Tuesday: Round the Campfire

We haven't had a Tipple Tuesday in awhile and I thought I'd continue the theme "around the campfire" from yesterday. I'm also including a ghostly brownie recipe that looks bewitching.


Imagine the marshmallow garnish in this drink is a ghost Peeps. 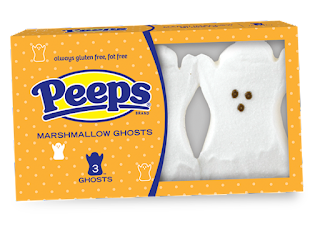 Pour Vodka and Root Beer over ice
Garnish with a marshmallow

I've had this brownie recipe sitting in my Pinterest board for quite awhile. It's time it saw the light of day (or the light of the campfire.) It's perfect for ghost story time and reminds me of S'mores.

I won't repeat the recipe here, but I highly encourage you to visit Mom Foodie for the step-by-step instructions. They look delicious.
Posted by Jori at 6:28 AM No comments:

Summer is almost here and I've been thinking about hosting a spooky evening round the campfire lately.  It's inevitable that at a bonfire someone will call for a ghost story. Darkness, fire, and ghosts are just a natural fit. 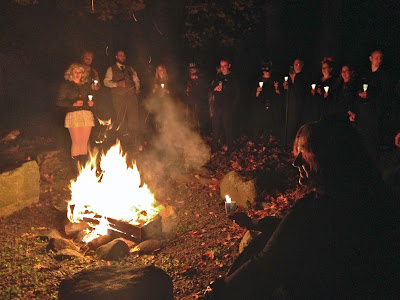 Because we are the spooky type, we, most of all, should be prepared to tell a chilling ghost story. But it's not as easy as you think. I have several true-for-me ghost stories I like to tell, but I've never given much thought to the delivery. I usually just tell the tale as I remember it. Since I've also usually had a few drinks by that point, the delivery can be- let's just say- messy.

This summer, I'm going to work on my ghost story. I plan to perfect it so that it's ready to tell at the first spark of flame. Worried that you don't have your own ghost story? Relax. Just find a story that you like and re-tell it in your own words.

If you need a little help getting started, I recommend a very short article at witf.org called Conjuring Creepy Elements: A Recipe for the Perfect Ghost Story to get you started.

You might also want to listen to people tell their own ghost stories. You may learn what not to do as well as how to do it well. For this I recommend a podcast by Jim Harold "The Paranormal Podcast Guy Since 2005" called Campfire (free on iTunes.) At Campfire, people call in and tell their own true ghost stories. Even if you don't have a bonfire, you can sit around a candle and listen to their stories on a hot summer night when you can't sleep. Don't forget the S'mores. 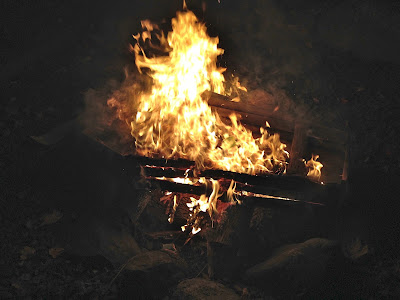 It's true that the nights are getting shorter right now, but if you own a Darkness Void candle that might be a good thing. The candles are so lovely it would be a shame to burn them up quickly. Of course you know by now that when I say "lovely" or "beautiful" it's in the context of macabre and spookish, right? These candles are devilishly delightful. How about that?

All of the candles are made from beeswax. I love that smell.

If you're a fan of Star Wars, Doctor Who, or Game of Thrones there are candles here for you, as well. Now is the time to start thinking about your Halloween displays. You can't buy everything you'll need in October. Start now.
Posted by Jori at 6:29 AM No comments:

I must be on a jewelry kick lately. I keep finding spooky jewelry I want to wear.  Anomaly Jewelry might actually have found me. Their shop proclaims "We sell unusual, fabulous jewelry for the lady who understands the hilarity of the dark side of life." Yep, that's me.

I can't stop giggling. There are lots of non-spooky, but funny, pieces on this site as well. I love the Golden Girls necklaces. Check it all out.
Posted by Jori at 6:30 AM No comments:

Gothic jewelry from the woods of Germany, I think that sets the scene nicely.  Sillycut specializes in Victorian-inspired art with a side of death. The shop carries jewelry and crocheted pieces that will make the professional (and amateur) mourner glow. I love it all.

There are so many wonderful things to look at in this shop. Don't pass this one up.

Mugs That Make an Impression

I don't usually drink my beer out of a mug, but I would seriously consider it if I had one from Kachaktano Mugs. These are some serious drinking mugs. Don't even think of putting some fruity beer in them. Kachaktano mugs need an Imperial Stout. Don't worry, they also make coffee mugs, but no caramel mocha coffee, please- unless you add some whiskey.

This would make a great Fathers' Day gift. Dad will look awesome drinking out of one of these while watching Game of Thrones or The Walking Dead.
These are great mugs for the office as well. No one is going to mess with you if you walk into a meeting with one of these. Unless you work in IT, that is. Somehow, I don't think it will have the same effect.
Posted by Jori at 6:33 AM No comments:

Somehow, I had missed the work of Gahan Wilson. I was familiar with the macabre drawings of Edward Gorey and Charles Addams, but for some reason, while I had seen some of Wilson's cartoons, I didn't know anything about the man behind them. 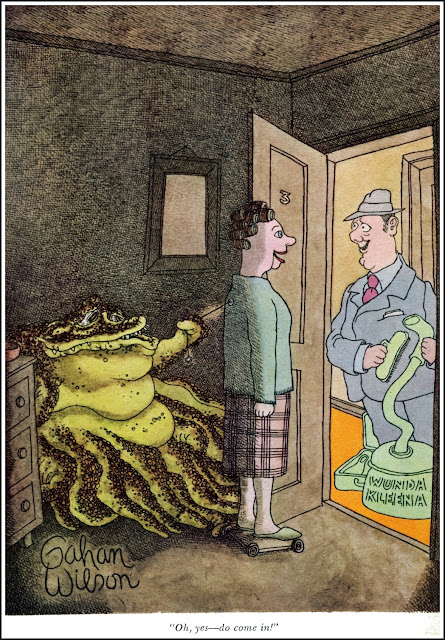 Maybe part of the reason I wasn't as familiar with Wilson is that although his cartoons are in The New Yorker, he is better known for his cartoons in Playboy.

Fortunately, a documentary was released in 2014 called Gahan Wilson: Born Dead, Still Weird by Stephen-Charles Jaffe. It took me a few years to discover it, but I rectified that last night. (I rented it from Amazon) 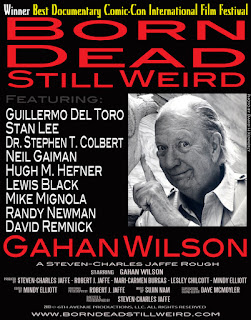 The film features Wilson in his studio talking about his life as a child, which greatly influenced his work, and his process of creating a cartoon. This is interspersed with some great commentary by people like Hugh Heffner, Stephen Colbert, Neil Gaiman, Guillermo del Toro, Stan Lee and others who talk about their love for Wilson and, of course, there are a truckload of wonderful cartoons. For many of these artists, their first exposure to dark humor came from Wilson's cartoons.

Wilson is delightful. His sense of humor and joy in life seem so opposed to his macabre cartoons, but for Wilson it's "gaiety in the presence of doom- I love that sort of notion." I can relate to that. 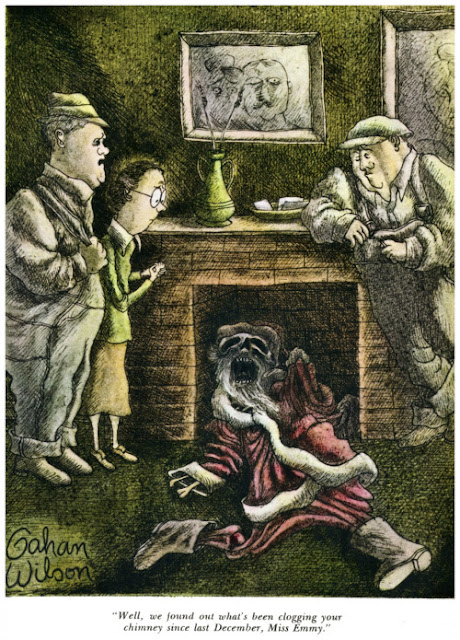 Really, not much is sacred for Wilson. He pokes fun at everything from religion to family life. Wilson says his weirdness is connected with the fact that he was "born dead" due to a complication with his birth. Fortunately the family doctor was able to revive him before he was officially declared dead. I suppose if you've been told that as a child you'd have a special relationship with death too. 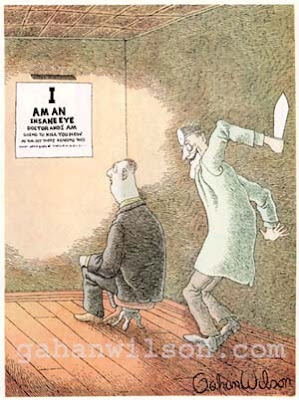 Wilson had a comic strip called "Nuts" in National Lampoon that was his reaction to the overly-simplistic view of life in "Peanuts" by Charles Schwartz. You won't find anything sugar coated in Wilson's work. If you aren't familiar with Gahan Wilson, I suggested you head to the internet asap. Then watch "Born Dead, Still Weird." You won't be disappointed. 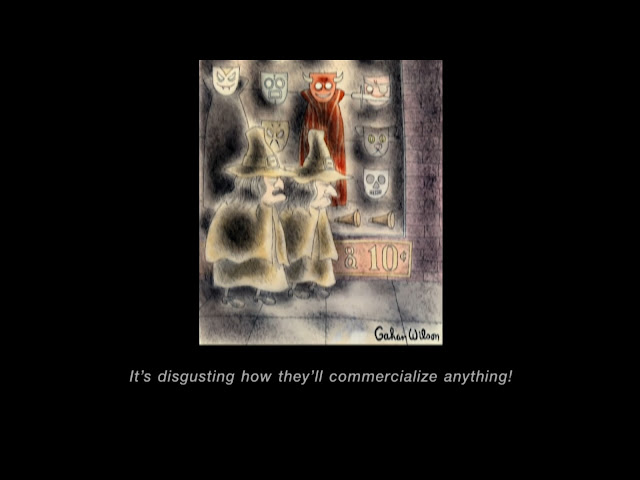 Black Willow Gallery is one of those shops that have a bit of everything. You'll find prints, clothing, home decor, and jewelry here. I love their tag line "Follow your inner moonlight. Don't hide the the madness."

Here are some of my favorites.


I'm a sucker for whimsical portrayals of death.
Posted by Jori at 6:27 AM No comments:

Ding-Dong! All Who Enter Beware

I am ashamed to admit it, but our back porch doorbell is plain. I'm so embarrassed by it that I haven't refreshed the batteries. If someone actually tries to use it that means they'll have noticed it, and how can I answer the door after that? So, it remains silent and unknown guests will wait forever.

All that is going to change since I found the Doorbell Company. Now, I will be proud to answer the back door. I just have to decide which one I'm going to purchase.


These are just a few of the splendid doorbells they offer. Take some time to look around their website.  We don't need to be embarrassed by our doorbells any longer.