Matthew Cox is a Philadelphia artist who works with embroidery and x-rays. What more needs to be said? The thing I love about embroidery art is that it is so simple in concept. You only need a needle and thread and something to put it on. It can be done practically anywhere. You could embroider in the bathtub if you felt like it.

Working with x-rays makes it a bit more complicated.

Cox has many pieces to look at on his website. Check out his Bodies of Work.
Posted by Jori at 6:48 AM No comments:

This is one of those things it's good to know about in advance and then you can file it away. Let's suppose you break your leg or your arm and you have to wear an ugly cast. Sure,  you can have friends sign it- boring and risky. By the time that cast comes off, you may have rid yourself of several of those friends.

That's where Casttoos come to the rescue. Castoos are fashionable decals for your cast. They come in a variety of styles, but as usual, I have my favorites.


I know I'll feel much better if I break something now. I hope I didn't just curse myself there.
Posted by Jori at 6:44 AM No comments: 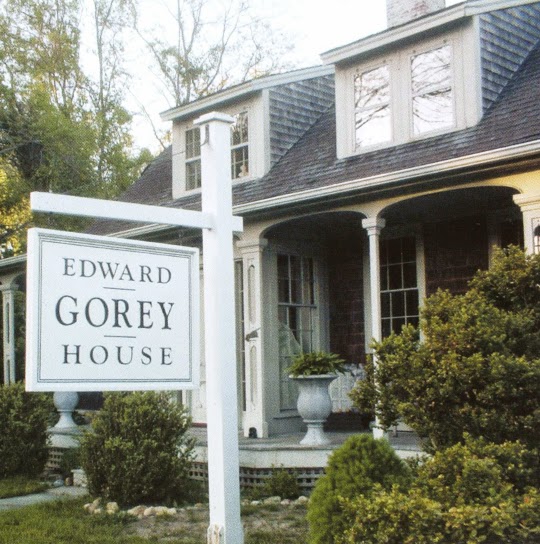 The Edward Gorey House museum is now open for the season. This is definitely on my summer day trip list this year. Located in Yarmouth Port, MA, Gorey's house became a museum after his death in 2000.  I love Gorey's playfulness mixed with a sense of the sinister and the museum seems to mimic his identity. Have you seen the museum's Facebook posts? They're often very amusing.

The mission of the museum is, as expected, to celebrate the life of the author, playwright, illustrator, and set and costume designer, but it also promotes animal welfare. Gorey was a huge advocate for animals and his charitable trust supports many animal welfare organizations.

From what I've heard you won't be disappointed if you make this a stop during your vacation this year, but if you can't go there in person there is a fabulous museum shop on line. It's just another way to show your support. Here are a few of my favorite goodies.

Christian Feast Days are not necessarily spooky unless they include the mummified body of the saint brought out for the people to touch. And, when using the word spooky, I mean thrilling. Ok, that was a little misleading. I think you can only touch the glass. Still pretty cool.

Saint Betina Zita's body lies in Lucca, Italy at the Basilica di San Frediano. You can visit her whenever the church is open. Saint Zita's Feast Day (Festival of the Flowers) falls on her death, April 27th.

Saint Zita was a servant known for giving away her own and her master's food and clothing to the poor. Several miracles occurred when she was in the process of "donating" to the poor. When questioned about what she was hiding in her skirts (bread for the poor) flowers tumbled from her skirts and the bread was nowhere to be seen. In another instance angels were seen making the bread she was instructed to make while she was out tending to the poor. On Saint Zita's Feast Day bread and flowers are the main attraction.

Curiously though, Saint Zita is the saint you pray to if you have lost your keys. I have a reputation for not exactly losing my keys, but locking myself out of my house. In effect, my keys are lost to me. So, Saint Zita may be just the patron saint I've been looking for. What's curious is that I have never read any stories about her finding keys. I guess that's one of the Catholic mysteries.

This Sunday, while you're  having brunch, amaze your friends with some tea reading. The art of Tasseomancy is a field of divination that began in medieval times and can be practiced with tea leaves, coffee grounds, or wine sediment. I think reading your fortune after a few glasses of wine could be interesting.

For me, the opportunity here is a new collection. Tea-reading cups were made by potters in England and the United States beginning in the late nineteenth century.  Of course they were; those Victorians had it going on! They're still being made today. Prices range from under $50 to over $400. Can you imagine an entire collection of tea-reading cups? That would be just grand.

Here are a few I found.

Raxfox is making some really ghoulishly fun furniture. The company is located in Germany and seems highly inspired by the Burton-esque movement. They're on Etsy and ship world-wide. I know just where I'd put these in my house.

French artist Christopher Goussault, who goes by the name KriSoft, creates strange and charming sculptures from paper mache. Goussault says that when he was younger he "dreamed of creating a store of toys and games for children." His work would be perfect in a very bizarre world of misfit toys.

Make a visit to KriSoft's blog and Etsy shop. You can spend hours just browsing the images in the blog even if you don't read French.

It's time for another Tipple Tuesday! (insert applause here) In case you've forgotten, Tipple Tuesday is my way of trying various alcoholic beverages that may be appropriate for serving at our Halloween party. It's important to have a plan well in advance.

Instead of a cocktail, I have decided to feature a beer. Krieky Bones is a sour beer from Firestone Walker Brewing Company in Paso Robles, CA. I haven't tried it yet, but I want it. That pretty much goes for  everything on this blog. 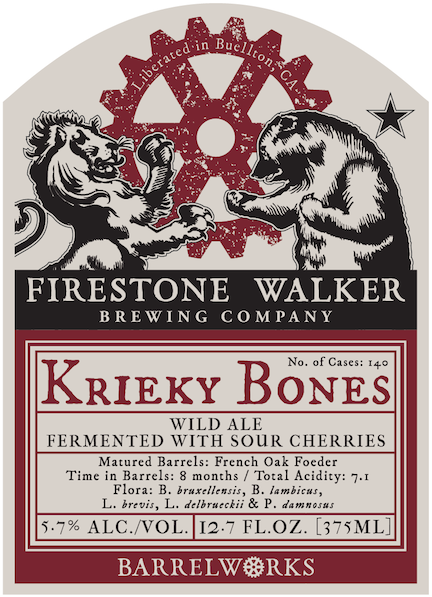 I am a fan of sour beers. If you haven't tried one, you'll find that the first sip will make you pucker your face, but then, you start to taste the fruit and you'll want more. Sour beers are made by allowing wild yeast strains or bacteria to enter the beer. You can't make these in a sterile environment.

According to the brewery, Krieky Bones "began it's life as a Flanders Red style beer aged eight months in a 2200 gallon French Oak Foeder, sour cherries were added and allowed a second fermentation. The aroma is cherry pie complete with  flavors of pie crust and spicy notes." Now you're mouth is watering, isn't it? Beer Advocate gives this beer a score of 97: World-Class. This would be a nice beer to sip on the porch.

Serve this in a tulip or flute glass.
Posted by Jori at 6:37 AM No comments:

If you're never sure what to dress as for Halloween, this post should set you up just fine. I found these amazing skull masks by High Noon Creations on Etsy. Put one of these on with an elegant dress or tux and you're good to go for any Day of the Dead party. Just don't forget to bring a straw if you plan on drinking any beverages. Buy now and you won't have to worry later.

These masks look like real bone but are actually made of rubber.

A Tattoo For Me?

I've wanted a tattoo since I was in my 20s. Let's just say that was some time ago. I still don't have one. Why? Because I'm can't make a decision and I'm crazy: I'm too caught up with placement (what if I wanted to wear a sleeve that cut it off or a collar that partially hid my tattoo?); color (will it match what I'm wearing?); and pattern (will it be too busy with my floral dress?) And, forget about putting it somewhere hidden. What's the point of that? I have nothing but praise for those of you who have been able to get a permanent tattoo. You know what you want and you look fabulous.

It appears that temporary tattoos are the path for me. There are lots of places you can buy cute little temporary tattoos and those are fine, but again if you want to say something you really need to go big. That's why I'm liking SeventhSkin tattoos at the moment. They're temporary and they make a statement.

If you're a Game of Thrones or Harry Potter fan you'll have many choices here. Now, another decision to make (heavy sigh.)
Posted by Jori at 6:52 AM No comments: