Jessica Johnson, the artist behind The Dusty Button Jar, says that "It all begins with a story in my mind, a strange little voice that whispers it wants to exist!" Johnson's dolls do look like they come from a twisted fairy tale and that's no surprise as she lists Tim Burton as an influence. Judge for yourself.

Johnson's dolls are beautiful misfits. I can imagine a charming story about their lives in a magical forest. Follow her latest creations on Facebook.

I'm not sure when I became aware that the journalist Margot Adler (1946 - 2014) I heard on NPR was the Wiccan Priestess Margot Adler that had helped me along my path to Wicca many years ago. It was probably after listening to one of her annual, often tongue-in-cheek, Halloween stories I looked forward to hearing every year.

I never met Adler, but had read her book Drawing Down the Moon: Witches, Druids, Goddess-Worshippers, and Other Pagans in America Today just after college and her unbiased, straightforward, well-researched look at Neo-Paganism in the United States showed me that Wicca wasn't some cult-like group of weirdos and in fact could be a very grounding and wholistic way to look look at life and the world. Many have credited Drawing Down the Moon for bringing paganism into the modern-light.

Adler died on July 28, 2014 from cancer and I wanted to take a moment to remember her today. Adler gave paganism in all it's forms some credibility. It's fitting too that I recognize Aldler today because this is Shivers of Delight's second birthday.  I don't think this blog would exist without Adler's impact on making paganism more acceptable to the general public. There wouldn't be nearly as much to discuss.

One of the last things that Adler wrote is a book called Vampires Are Us: Understanding Our Love Affair with the Immortal Dark Side. It is on my reading list for this year. Adler said about the book that while her husband was dying she felt herself drawn to books about vampires. She read every one she could find because it helped her deal with issues of mortality. The first part of her book talks about our attraction to the vampire story and the remaining part is a review/description of all the different vampires stories she read. This sounds like a good reference book to have around.

If you haven't read anything by Adler, I encourage you to do it now. Also take a look at the announcement of Adler's death by NPR and her New York Times Obituary.  Little known fact about Adler- she landed the first interview in the U.S. with J. K. Rowling. (You can read a transcript of the interview from 1998 here)

I have a few spare bones lying around that I think would make a lovely piece of jewelry or perhaps a hair ornament. That's as far as I get, and it's probably why I am attracted to the Emely Rose Boutique. There you will find interesting pieces made of ethically-sourced bone, feathers, and crystals. The work has a aura of magic surrounding it. You can almost see it.


These pieces are not for the timid. You have to have a certain power of your own to wear them. Dare to make a statement.

I know that you all love embroidery because the blog gets more attention when I post stitching projects. It's such a simple, beautiful medium. It's a little like magic to me how you can take a strand of thread and create something so richly-layered.

Artist Alaina Varrone has captured my attention.  Her work makes me stop and stare every time I see it. I think it's the quietness in her pieces combined with a bit of uneasiness and horror that makes me love her.  The simple stitches and textures she brings to each piece allow you to focus on the subject and not her handiwork. I have a feeling that simplicity is harder to do than it looks.

Varrone has a variety of themes that she works with - many of them might be considered adult themes- but it's the eerie subjects that I like best. They're all awe-inducing, however. When I realized that she is from New Haven, Connecticut, I decided I want her for a best friend. We're practically neighbors.

Her website includes a gallery and a blog. She also has a shop on Etsy called Wizards Paw where she lists pieces from time-to-time. I'm showing you work from her gallery today. I think it would be a good idea to follow her on Facebook or Instagram. We need to keep track of this one.


Varrone is preparing work for a show on America's Cryptozoological Monsters. I think I'll be seeking more information on that for you. That might be worth a road trip, don't you think?

Bones of the Coast on Kickstarter

Nothing makes me happier than to spend an hour trolling through Kickstarter to bring you a chilling new project. Actually I'm just happy to have an hour to sit down.

Yesterday I came across a comic book of horror stories about the Pacific Northwest coast of the US. Bones of the Coast brings together 35 veteran and newly-discovered creators from around the world. Calling itself an anthology of West Coast horror, the book will contain over 220 pages of full-color haunting stories. 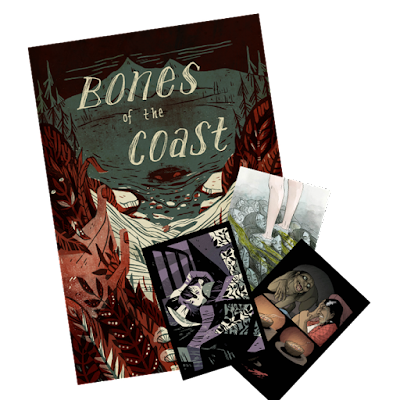 Bones of the Coast is being published by Cloudscape Comics Society out of Vancouver, B.C., Canada, and is being partially funded by a grant from the Canadian government. Yay! That's a sure sign that this project will succeed. It's expected to be ready just in time for Halloween.

This from the publishers:
While Bones of the Coast does hope to frighten and unsettle you, we explicitly did not accept sexual violence. Nevertheless, Bones of the Coast is not recommended for younger readers and contains body horror, strong language, and one instance of self-harm.

Just so you know.
Campaign rewards include digital and hard copies of the book along with opportunities for commissions from some of the artists and additional copies for resale. At the highest level, your name will be featured in one of the stories.


There are 24 days to go in this campaign and it is a little more than half-way to the goal. Let's see if we can help them out. Pledge today!
Posted by Jori at 6:41 AM No comments:

This stuff is fun! Cherryloco carries nearly indestructible, haunting jewelry with which to bedeck your sassy-self. It's super affordable and if you aren't as versed in paying for your purchases in pounds, they have an Etsy site too. They make it so easy. I'm showing you items from their Etsy site, but you should also check out the full shop.

There are nearly 200 items on their Etsy site, but the website has so many more. You'll spend your coffee break looking at everything and since it takes so long, make sure you purchase more than one.

I secretly want to be a creepy doll artist. I have a fantasy of living in a large Empire-Revival house (think Addams Family) with a garden full of poisonous plants and a large workshop for creating troubled dolls. But enough about me. Today I bring you someone who in my mind is living the dream.

Rose Frazer of Dark Manor Dolls says she has been making dolls since she was a child. What began as sock puppets now is a full-blown business making dolls from clay and fabric. These are dolls of fantasy and fairy tales. I'm a fan. After looking at her website and checking out her blog, I want a copy of her reading list.

The dolls I'm displaying today are available at her Dark Manor Dolls Etsy shop, but take a look at the gallery on her website too.

You know it's bad when you have to start looking at buying a new piece of furniture to house your collection. I really can't quit my day job.

Crumpet Clothing in California has some saucy lingerie, but I'm sticking with the spooky day wear for this post.  (You should definitely look at the saucy lingerie, though.) The designer, Abby Rose, creates simple, stylish pieces you could wear to the club or grocery store depending on your style- or your grocery store.

There are so many good (and not so good) shop names on Etsy. How do they come up with them? Contrived to Charm has one of those clever names and the goods to match. They mostly feature leather accessories, but what first drew me in was the adorable tiny cases with mother-of-pearl covers. They are divine.

The leather pieces are just as interesting.

These pieces are really gorgeous. Check out the entire site. And because I know many of you are probably stitchers, I have to add this leather needles and pins holder. Now, that is adorable!