For the last several years, my husband and I have been celebrating New Year's Eve with a time zone more conducive to my early bedtime habits. With a live camera pointed at the city of our choice, we have rung in the New Year with Poland and Switzerland. This year it will be Dublin, Ireland.

If you want to ring in the New Year with the eastern United States time zone, may I suggest Andy Warhol's grave? There is a live camera pointed at Warhol's grave 24/7. It's called the Figment Project and it's sponsored by The Andy Warhol Museum and EarthCam.

Warhol died in 1987 and the Figment Project was installed in 2013. The grave is at St. John the Baptist Byzantine Catholic Cemetery in Pittsburg, PA. Fans of Warhol visit the grave and leave items of devotion.

If you have nothing better to do tonight, raise a glass to Warhol and maybe watch a few others do the same thing. Who knows, maybe you'll even see Warhol.  You can view the live cam at the link above. You can also use the EarthCam app (it's free!) to see it and view many, many live cameras around the world. (if you're viewing on a tablet, use the app) It's kind of awesome.


I never understood why when you died, you didn't just vanish, and everything
could just keep going on the way it was only you just wouldn't be there.
I always thought I'd like my own tombstone to be blank. No epitaph and no name.
Well, actually, I'd like it to say "figment." 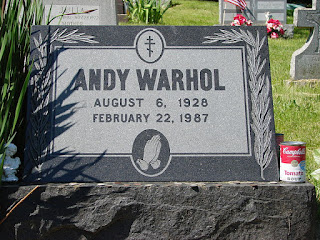